Plastic Surgery for Men. Everything you need to know about Calf Implants and Muscle Augmentation Procedures. 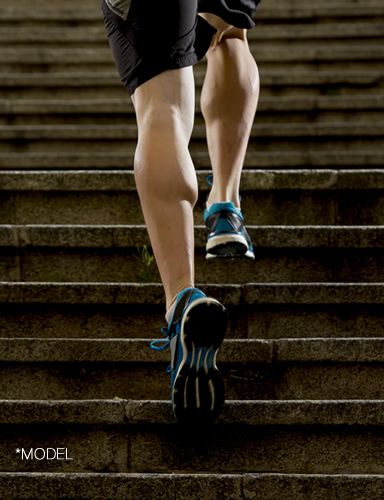 Men and women alike wish to have a more muscular and toned physique, and the calf region is not exempt from this. Despite vigorous exercise and body building, some people are unable to attain the definition that they desire in the calf. Many patients who present for consultation want to look good in shorts and skirts but due to a hypoplastic calf say that they are unable to do so. To that end, calf implants of various shapes and sizes have been created to increase volume in the calf.

A cut is made on the posterior aspect of the leg, horizontally in the posterior knee fold. A pocket is made between the lining of the muscle and the calf muscle itself with blunt instruments to minimize bleeding and unnecessary pain post-operatively. The implant is then placed in the pocket. The muscle lining is sutured with absorbable sutures and subcuticular sutures are used to close the skin. Over time, the implant becomes surrounded by a scar tissue pocket, where it stays for the rest of the person’s life.

Calf augmentation was originally designed to fill defects left following oncologic surgery, after trauma or infection, or due to genetic abnormalities. There are many causes for unilateral or bilateral calf deformities and they include but are not limited to the following: 1. Congenital hypoplasia due to agenesis of a calf muscle or adipose tissue reduction; 2. As a sequelae of clubfoot (talipes equinovarus), cerebral palsy, polio, and spina bifida; 3. Due to poliomyelitis or osteomyelitis; 4. Following fractures of the femur and as a result of burn contractures. While calf implants do not improve function of the affected extremity, patients are pleased with the improved aesthetic appearance of the leg after implantation.

Since its initial introduction, calf augmentation surgery has become a widely popular aesthetic procedure to help patients gain more shapely legs. Whether it is a body builder that is looking to “bulk up” the leg despite a vigorous exercise regimen or the average patient who wants a more shapely calf region, there are implants of various shapes and sizes to help add volume to a hypoplastic calf.

Some authors have noted that calf prostheses have the disadvantages of being unable to adequately correct ankle deformities, having a risk of displacement, having a risk of capsular contracture, and potentially having problems with extrusion. While we do agree that calf augmentation does not correct ankle deformities, we feel that this can be addressed with judicious fat grafting to the ankle region via small stab incisions at the medial and lateral malleoli.

Based on the patient’s existing anatomy and desires, the surgeon will find an implant suited to that patient. 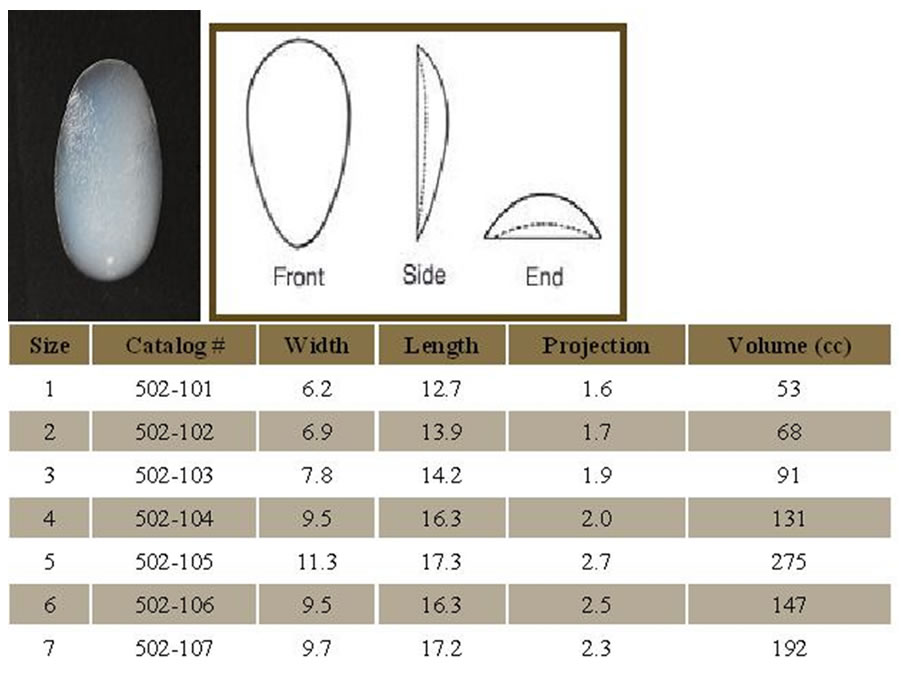 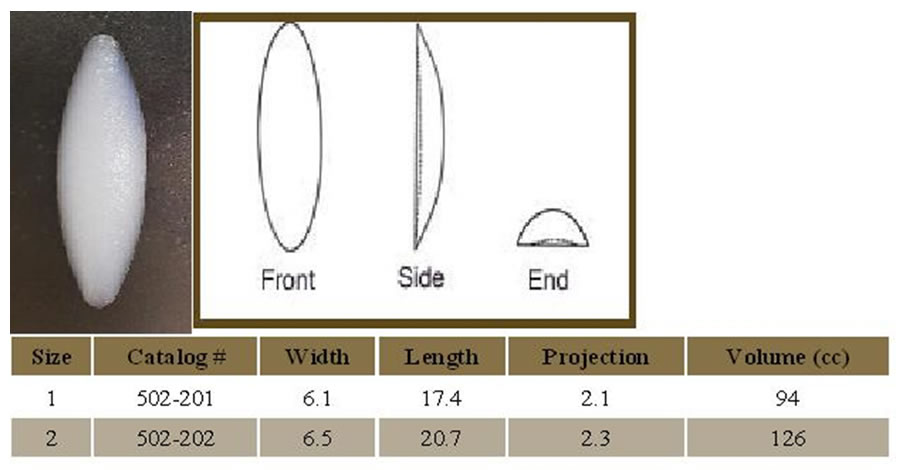 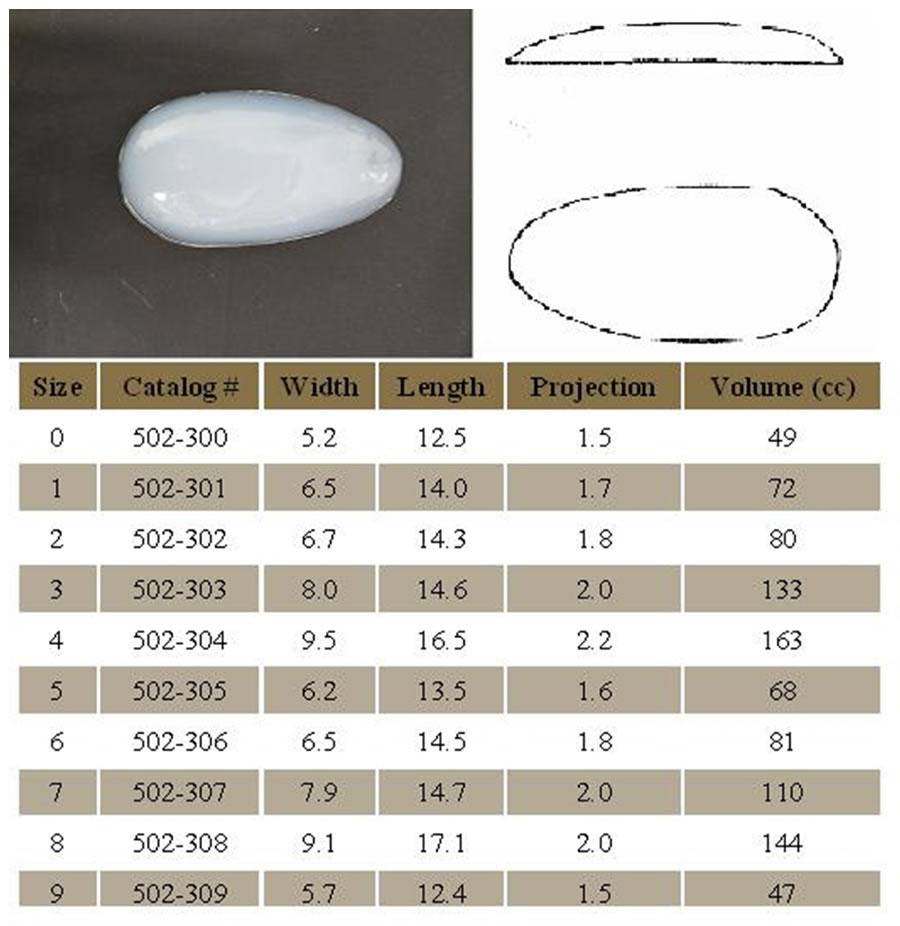 Postoperatively the patient may begin ambulating starting on the evening of the procedure. They may shower POD 2, making sure to keep dressings clean and dry the Robbins tape with a hair dryer on a low heat setting. Patients are then allowed to begin light activity at week 2 and full unrestricted activity at weeks 4-6. Patients are asked to wear compression stockings with a grading of 20-30mmHg for four weeks post-operatively to prevent dead space, thereby helping to reduce the risk of seroma formation. The legs are to be elevated as much as possible to allow for better lymphatic/venous drainage. Patients are prescribed both narcotic analgesics along with muscle relaxants (diazepam 5mg every 8 hours as needed for spasm) to assist with post operative pain.

In performing calf augmentation, there is a host of complications that can arise;

In performing surgical calf augmentation procedures, complications can arise. Expert Cosmetic Surgeons who have over 30 years of experience on the cutting edge of implant procedures can substantially reduce the risk of complications, but it is important for you to be aware of the possibilities so that you take the proper care of your implants after surgery as advised by your doctor. Make sure you ask your doctor about these complications so you are an informed patient.

In patients that have been afflicted with club foot, polio, or trauma, there is at times a noticeable discrepancy in the size of the lower extremities. For those patients wishing to achieve symmetry, a calf implant may be an ideal way to do so. However, that being said, a single augmentation may be insufficient to achieve symmetry.

To date several surgeons have designed custom expanders to slowly expand the calf region without having to subject the patient to multiple operations and risk possible issues of skin slough and excessively elevated compartment pressures. While the idea of an expander makes sense, many patients are unwilling to go through a prolonged expansion period. In contrast, it has been the author’s standard practice to place a fairly large silicone prosthesis into position as per the technique described previously. Then 6 months later, after having stretched out the proposed implant pocket, a second procedure can be performed with either a larger standard implant or a custom made implant. Regardless of the second operation performed, the patient is able to enjoy a fairly normal lifestyle free of return doctor visits for expansion and the possible discomfort associated with a port near the popliteal fossa.   Although this method does require close attention in the post operative period on the part of the patient and physician, it has been the author’s experience that patients are much more content with the idea of this approach than the concept of slow expansion over time. 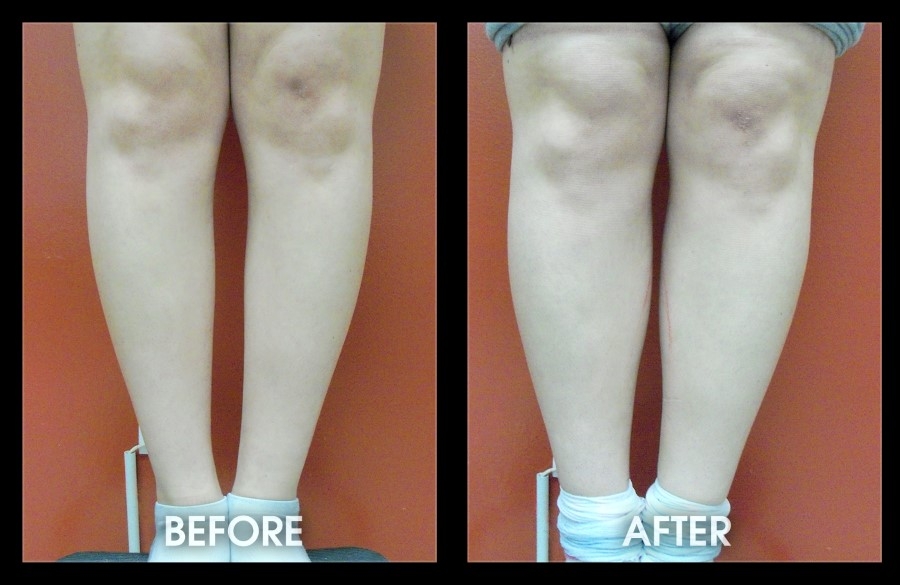 Over the course of the development of the calf augmentation procedure, some physicians have begun to explore the use of fat grafting to correct hypoplastic calves. The use of fat injection for augmentation was explored to eliminate some of the common complications associated with implants: implant palpability, lack of correction of the ankle region, implant displacement, and the possibility of capsular contracture. While some have used fat grafting for calf augmentation with some success in their patients, our results have been less than impressive. The largest complaint noted in our patients that we have augmented with fat grafting is that the overall augmentation is not to their satisfaction or that the augmentation is asymmetric. These complaints are largely due to the variability in fat take and potential for fat cell death. In the hands of many cosmetic surgeons, the average patient can expect a fat take of 50-70% without the use of stem cells. However, this is largely dependent on placement of the fat in a place that has a rich blood supply that can foster the growth of the fat cells. When grafting to the calf, the calf muscles are already largely hypoplastic and so there is a lack of a robust blood supply to support fat cell take, in our opinion. While our results are based solely on fat grafting without the use of tissue cocktail, we do not routinely recommend fat grafting to the calf as the results are inconsistent and there is the potential need for serial injections. We will on occasion perform fat grafting to the distal aspect of the leg to produce further symmetry of the legs, particularly in club foot patients. But, due to the minimal musculature and lack of robust blood supply the grafting to this area if not reliable.

Calf augmentation with silicone implants is a procedure that can nicely enhance the physique in a reliable fashion. The overall satisfaction rate is excellent as long as care is taken to ensure several things: choosing the right implant to meet the patient’s expectations; meticulous attention to dissection of the pocket to minimize implant migration; and layered closure to minimize hypertrophic scarring.

Ready to tone and improve the appearance of your body?

Call us now for a complimentary consultation and evaluation.